VLC Media Player is a favorite multimedia player which is portable and open source. This software application is a powerful multimedia player which supports multiple audio and video formats regardless of their nature. Its framework also plays DVDs, VCDs, Audio CD as well as many other streaming protocols. It works on different operating systems like Windows, Mac, Linux etc and is completely free of adware or spyware. It is simple to install and use with inbuilt media converter and streamer.

Packet based media player is the one which has ability to play incomplete or damaged video files. This is possible because in packet based networking, data travels in form of streams of packets. So even if some part of the video is damaged or the video is unfinished, it can play rest of the part. This is also termed as frame by frame playback. The picture below is explaining, how you can skip frames backward or forward. You can jump forward or backward if there is any interruption detection in the video. With playback options, you can always pause and resume videos or even select custom bookmarks. You can also move your video forward or backward if you want to skip some part or see some part of the video again.

2. Supports Wide Variety Of Audio As Well As Video Formats and Effects

Plus you can add effects and synchronize tracks accordingly as shown in the screen shot below. 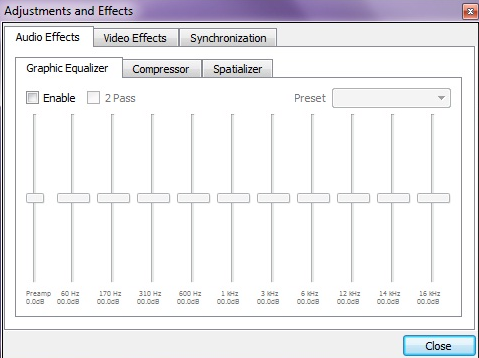 This is a fantastic feature of this VLC media player that you can customize its interface according to your requirements like if you don’t want the clutter of icon at your screen, you can select the functions or icons that are important to you and place it according to your comfort. For example, you can select from the buttons or tool bar elements that you use frequently and place them at the top most row. You can select full screen or minimal interface and you can even add a new interface. Screen shots below are explaining how to customize the program.

VLC media player supports high definition recordings like Blu-Ray, HD-DVD without any pausing or lagging. High-definition video or HD video is any video system of higher resolution than standard-definition (SD) video and most commonly involves display resolutions of 1280×720 pixels or 1920×1080 pixels. It can stream live content to a monitor but the content should be non encrypted. This player also supports DMO and can record the desktop. It can also create screencasts and play video as a desktop wallpaper.

With VLC media player, you can easily transfer audio files to any other entertainment system like home-theater and that too wirelessly. Also VLC media player can be installed directly from a USB or other external device.