Defragmentation is a process which reduces the amount of fragmentation for maintenance of file systems by organizing the content of hard disk in which fragments of a file are stored. Fragments are the parts of data which gets stored non sequentially due to inability of system to lay out related data contiguously. Mydefrag is a solid disk defragmenter and optimizer which makes your hard disk better and faster. It is a freeware and very light application. It got installed in seconds and is free of advertisements. Before setting it to run, you need to specify the script like analyze only, consolidate free space etc. from select script. It is a powerful utility which gives you the complete details of your hard disk and then optimize it for longer life and better speed.

Mydefrag, earlier known as JKdefrag not only organizes fragmented files but also optimizes the storage disk in order to bring better performance. This program may take a while to defrag, but its performance outweighs this by any level. My Defrag is a powerful freeware disk defragmenter software which organizes files into zones, such as directories, regular files, and rarely used files. Files that are accessed often are placed at the beginning of the hard disk while the files that are commonly used together are placed in closely to each other. This organization results in high efficiency of computers by increasing the speed. 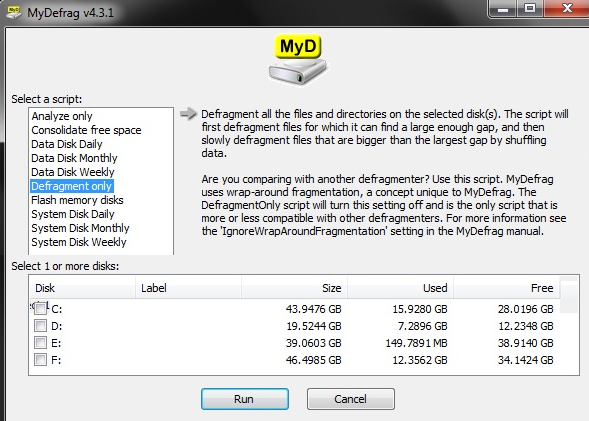 Mydefrag can perform disk analysis and after performing analysis, it will make a report and show it to you. It gives you the detailed summary of defragmented disk like disk space, free space, clusters etc. Report can be viewed statistically or in diskmap view. Mydefrag also automatically pauses between disks, so that you can view and interpret the diskmap. You can also have a zoomed view of report.

These scripts are designed for daily, weekly and monthly defragmentation and optimization of system disk i.e. “C” disk.

When a defragmentation tool organizes the fragmented data, it leaves fragmented space free. This free space is called ‘holes’ which remains spread all over the disk. These holes get filled with newly created file. Mydefrag merges free space into a large contiguous block during the optimization process to prevent file fragmentation. It defragments system files smartly and moves them to the fastest part of the disk which improves the access speed of system files which results into increased system stability and speed.