Truecrypt is a freeware open source disk encryption software which protects your data by creating a virtual encrypted disk within a file but mounting it as a real disk. This is a powerful encryption application which has 11 algorithms for your file encryption in password-protected volume. In truecrypt, you can use files and partitions for encrypted data storage. This application is embedded with ultimate features to offer you powerful data protection like recommending user with complex passwords, erasing the signs of encrption process like keystrokes and much more. User interface is not much intuitive but it offers a guide to beginners when you run this program. Its installation is easy but it may take you some time to completely understand its functioning. It works on XTS mode of operation and encryption algorithms used are AES-256, Serpent and Twofish.

Truecrypt creates a virtual encrypted disk within a file and mounts it as a real disk. It can even encrypt an entire storage device or drive. This application is basically used for OTFE i.e on-the-fly encryption which means that data is automatically encrypted right before it is saved and decrypted right after it is loaded, without any manual intervention. It can encrypt entire partition means that entire file system can be encrypted with Truecrypt. Now, encrypted can never be decrypted without a correct password and hence it makes your data powerfully safe. From the screen shot attached, you can check, how it creates a virtual encrypted disk in different drives and mount it with mounting options. 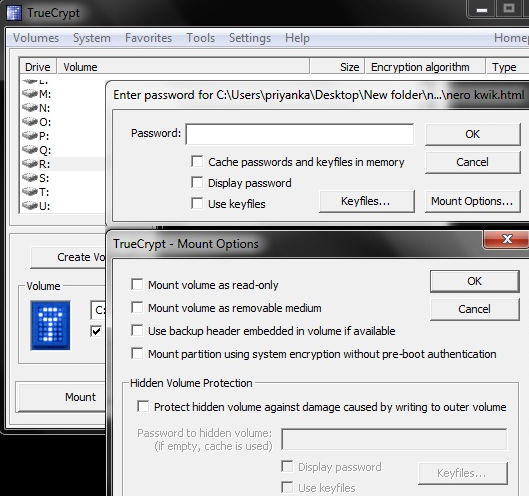 Pre-Boot authentication means that it can encrypt a partition or a drive where Windows is installed. This means that user need to enter a correct password to gain access to the system every time before Windows boot. You further have the options to put the system under normal encryption or hidden one( in this a hidden operating system is created whose existence is impossible to prove), so that if you don’t want someone to have access to your secure data, you can always open the OS normally with the password but your secure data remains hidden under another password. Then you can select area of encryption also. This application also has single as well as multi-boot option, so that if you have more than one operating system installed in your computer, you can protect all of them. 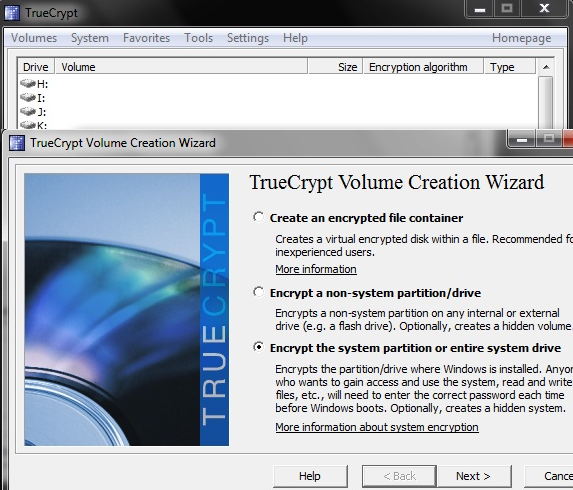 Parallelization and Pipelining are the techniques which allow data to be read and written with the same speed as if the drive was not encrypted. Parallelization is a process of using all the cores or processors in parallel for encryption and decryption of files. For example, when this application encrypts or decrypts some data, it will split the data into number small pieces which is equivalent to number of cores. Then these pieces are encrypted or decrypted in parallel which increases the speed of encryption or decryption and makes it directly proportional to the number of cores. Due to this technique, your speed of opening a file remains same as it would have been without encryption even with multi-core processor. Now pipelining means a set of data processing elements connected in series, so that the output of one element is the input of the next one. Due to pipelining, when an application loads a part of file from encrypted volume, Truecrypt is automatically decrypting it and hence makes the process fast. 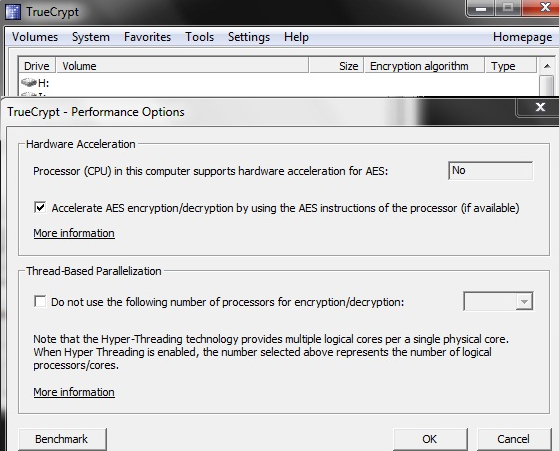 In case of some adverse condition which forces you to reveal your password, Plausible deniability is used. You can either use Hidden Volume and Hidden Operating System or no truecrypt volume can be identified.

Comments on this entry are closed.